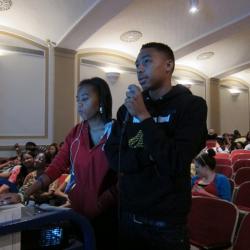 From July to August 2012, 35 teens from Philadelphia worked at the Free Library to give their voice to what sort of environment and programs the library should offer for youth in Philly.

From Monday-Thursday, the teens worked at their local library sites completing daily assignments in the form of action research. For example, polling teens in an interactive way (using post-its and stickers) about whether or not they liked or attended programs currently offered by the library. They organized their data through a branch-specific tumblr blog. Each branch was visited weekly by one of four “Team Leaders”— a college student/near-peer mentor who rotated around branches, guiding students with work and helping with any technical or organizational questions. On Fridays, the group of 35 convened at the Parkway Central Library, where they formed small groups to collaborate and discuss their findings, as mediated by an outside presenter, such as Philly Youth Radio and the youth media group Postive Minds. Each project group went on to present their work at the summer-end celebration in front of ~200 teens and library staff members. A total of six final PowerPoint, Prezi, and poster board presentations were created.

The first component involved creating a customized Google map, outlining what they determined was their branch’s neighborhood, as well as places where they and their peers hung out. 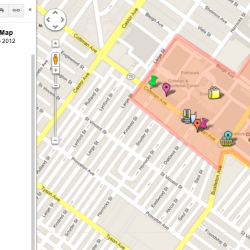 After creating this map, they discussed and outlined the sorts of resources their community lacked for teens (the second component). Once the gaps in teen services were identified, the teens used Action Research to develop ideas on how the Free Library of Philadelphia could potentially (and realistically) fill in those gaps. The Team Leaders encouraged teens to think big: consider classes they wanted to take but couldn’t because the classes are too expensive, or their schools don’t offer it. For example, one group found through Action Research that their neighborhood lacked affordable, good (and healthy) food. The teen group proposed a cooking class that teens could participate in afterschool, where they could not only learn how to cook, but be able to enjoy the food they created. Action Research is a method that worked particularly well for the Teen Programming Assistants. Instead of asking their peers to fill out a survey and then going through the administrative work of tallying up results, they encouraged their peers to physically participate in a survey by casting their votes and ideas for programs using a sharpie on sheets of paper taped to the wall. The Teen Programming Assistants were able to immediately see the results of the survey in a visual format. Another form of Action Research in regards to teen programming was offered in the pilot Teen Center in Philbrick Hall at the Central Library location from May to June 2012. 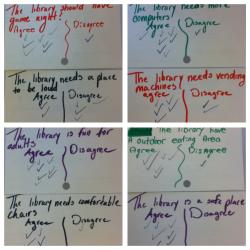 In addition to “surveying” their peers, they performed action research to get feedback from library users (teen, adult, and children), librarians, library staff, and non-library users (often their families and friends). 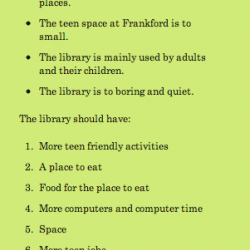 The final component of their summer research involved considering physical space. What should a teen center in a library look like? What types of furniture and technology should be available to teens? The Teen Programming Assistants used Action Research to gather ideas about seating, colors and architecture, then created virtual models of their ideal teen space using the web-based diagram editor Gliffy. They used these prototypes to create physical 3-D models using foamcore, paint, xacto blades, hot glue, and other supplies. 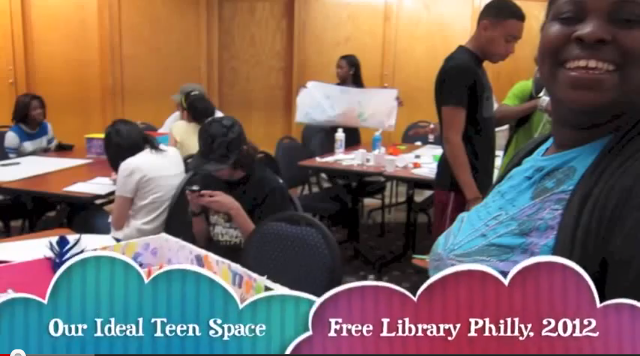 The Friday group sessions allowed all of the teens to hang out collectively and work together to share ideas and concepts from their daily assignments (example set of weekly assignments can be accessed here). Students were expected to present findings from the week during these meetings, then plug that data into their larger end-of-summer presentation, under the guidance of the outside presenter who shared with them a new technique of conveying data, stories and ideas into their final presentation of their complete ideal teen space. In addition to planning their final presentations on Fridays, the Free Library hosted outside speakers to present different methods of performing research and outputting data to the Teen Programming Assistants. Teens created audio interviews with Philly Youth Radio about the teen spaces they were developing: 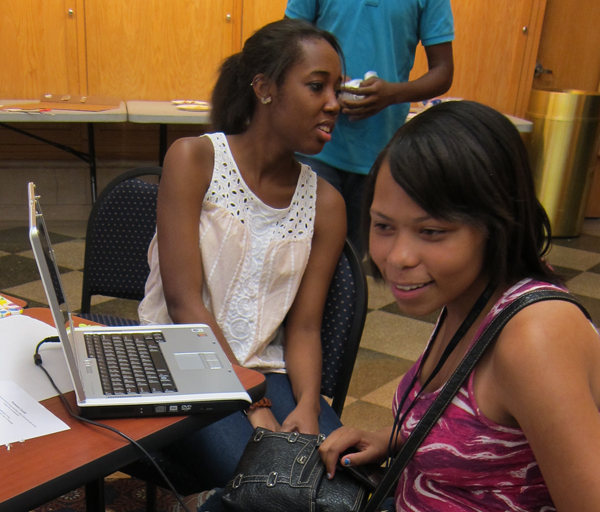 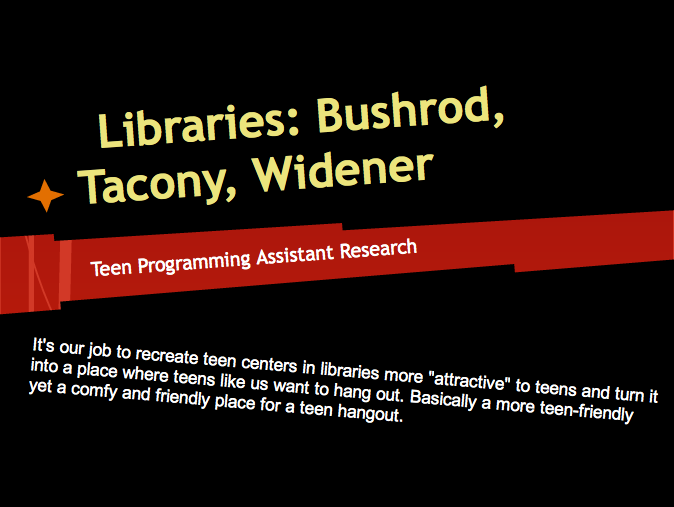 Moving forward with our Youth Design Council, in late August twenty-two students who were involved with the Free Library over the summer, including several from the Teen Programming Assistant group, joined and participated in a Youth Design Council focus group for the IMLS/MacArthur Planning Grant. They reflected on the research conducted by the Teen Programming Assistants over the summer and developed answers to the following questions:

1.     What should you put in a teen space so that you’ll get more teens to come in?

2.     Describe the people who should work in the teen space.

3.     What’s the best way for the library to reach teens (to get the word out about the new space)?

4.     What type of activities or programs would you like to see in this teen space?

5.     What can the library do to guarantee that teens will love the space and come in regularly?

The Youth Design Council will continue to meet monthly throughout the academic year at the Parkway Central Library to explore each of the above questions in depth. They participate in workshops with community arts partners to develop different ways of brainstorming and organizing their ideas, and these workshops will also allow the Free Library to test out potential programs for the Teen Center, whether it’s video production, radio, comics, etc. 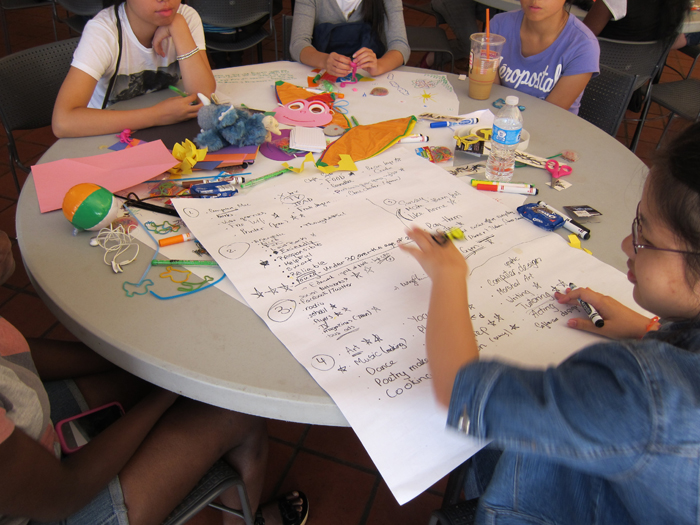 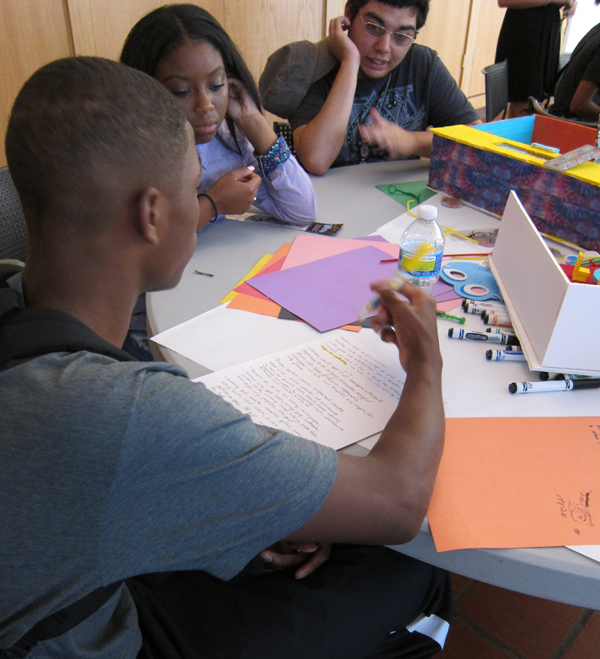 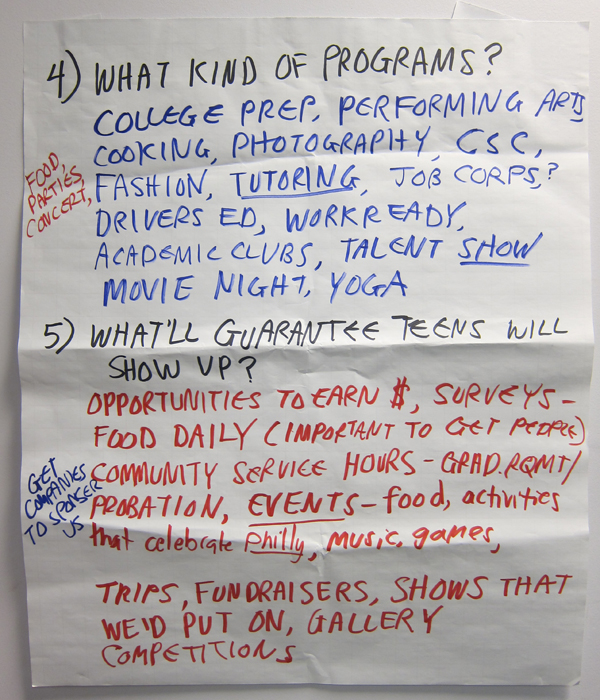 The Free Library of Philadelphia has been approached by the Graduate School of Education at the University of Pennsylvania to host a Graduate-level intern for their IDEAL program (Masters in In/Formal Designs for Experiences and Learning) for the 2012-2013 academic year. The Graduate-level intern, who recently received her undergrad degree from MIT, will be working primarily with us on our IMLS/MacArthur grant research, bringing outside expertise in exposing the Youth Design Council and the Free Library to different theories and pilot practices for informal learning and learning environments, particularly those that could work specifically in the Free Library of Philadelphia’s preexisting space, as well as the proposed space.

Working with 35 teens over the summer was a challenging, exciting experience. The teens ranged in age as well as in academic achievement. Many of them had never held a job before, and though some exceeded our expectations, others required extra encouragement. In spite of these obstacles, we were able to galvanize the teen group into active participation, and by the end the teens were fully engaged and ready to talk about their ideas on Teen Spaces. When asked what they liked most about the program (by a non-staff adult), one teen responded, “I liked that we got a chance to say our thoughts. Our opinion is taken seriously.”

Some recommendations/best practices to other Learning Labs grantees who have the opportunity to work with a large group of teens:

1.     Teens need more hand-holding than we anticipated. Particularly those who are not library users, and don’t have an existing vested interest in teen services at a library. However, these were also the teens that are our target audience – taking the time to manage, guide and listen to these teens proved to be invaluable. This is where our Team Leaders were extremely helpful, because they were able to mentor those teens on a one-on-one basis.

2.     Bring in outside presenters. It refreshes both the teen and your perspective, and gets you connected to arts organizations in your city.

3.     Reward the teens when they’ve done a good job. We had an ice cream social, which provided some of the teens with an opportunity to casually talk to us about the work they did over the summer.

4.     Set up a competition to get good work out of the teens. Many didn’t begin blogging their daily assignments until we established a tumblr challenge. Teams had an opportunity to earn points weekly, and the group with the highest scores won for that week.

5.     Keep in touch with the students. Enable them to join a non-paid group that meets throughout the school year. Not only will you have a reliable group of teens to develop ideas with over an extended period of time, you’ll give them the opportunity to add this internship to their resumes, and it will empower them and encourage them to become more active library users.